US$
My Favorite
Account
Or sign-in with another identity provider
Login with FacebookLogin with GoogleLogin with Amazon
Register Sign in
Cart 0.00
0
0
View cart
Checkout
US$0.00
Cart is empty
Tea Store›Articles›Chamomile tea benefits. How to drink and brew?

Chamomile tea benefits. How to drink and brew?

How to brew and drink chamomile as a tea? Chamomile Tea Benefits.

The useful properties of chamomile have been known since ancient times. It is one of the most used medicinal plants. Some people brew and drink chamomile flowers as a tea. In this case, it is necessary to take into account some nuances, because the chamomile is still a medicinal herb - and, therefore, there are contraindications to its use.

In what diseases is chamomile tea benefits?

Chamomile flowers are traditionally included in the classic Tealyra herbal teas. We present you the Floral Serenity chamomile tea. Perfectly selected blends of wild mountain herbs and flowers of the Greek mountains have a gentle effect on the body and help normalize the work of all systems, strengthen the body and fill it with energy.

This is not a complete list of the positive effects of the drink on the human body and health. Chamomile tea is recommended to drink for the following ailments and diseases:

Attention! The drink is excellent not only for adults but also for children. However, it is not recommended to use chamomile for children in order to prevent illnesses.

How to drink chamomile tea?

To achieve the desired result, it is important to drink chamomile tea correctly. First of all, it should be done in courses. After a week of drinking should be followed by a week break. Each day, you can consume 100 ml of drink of medium strength, not more than three times.

If a person decides to take chamomile tea for a long time, he needs to observe several rules:

How to brew chamomile tea properly? 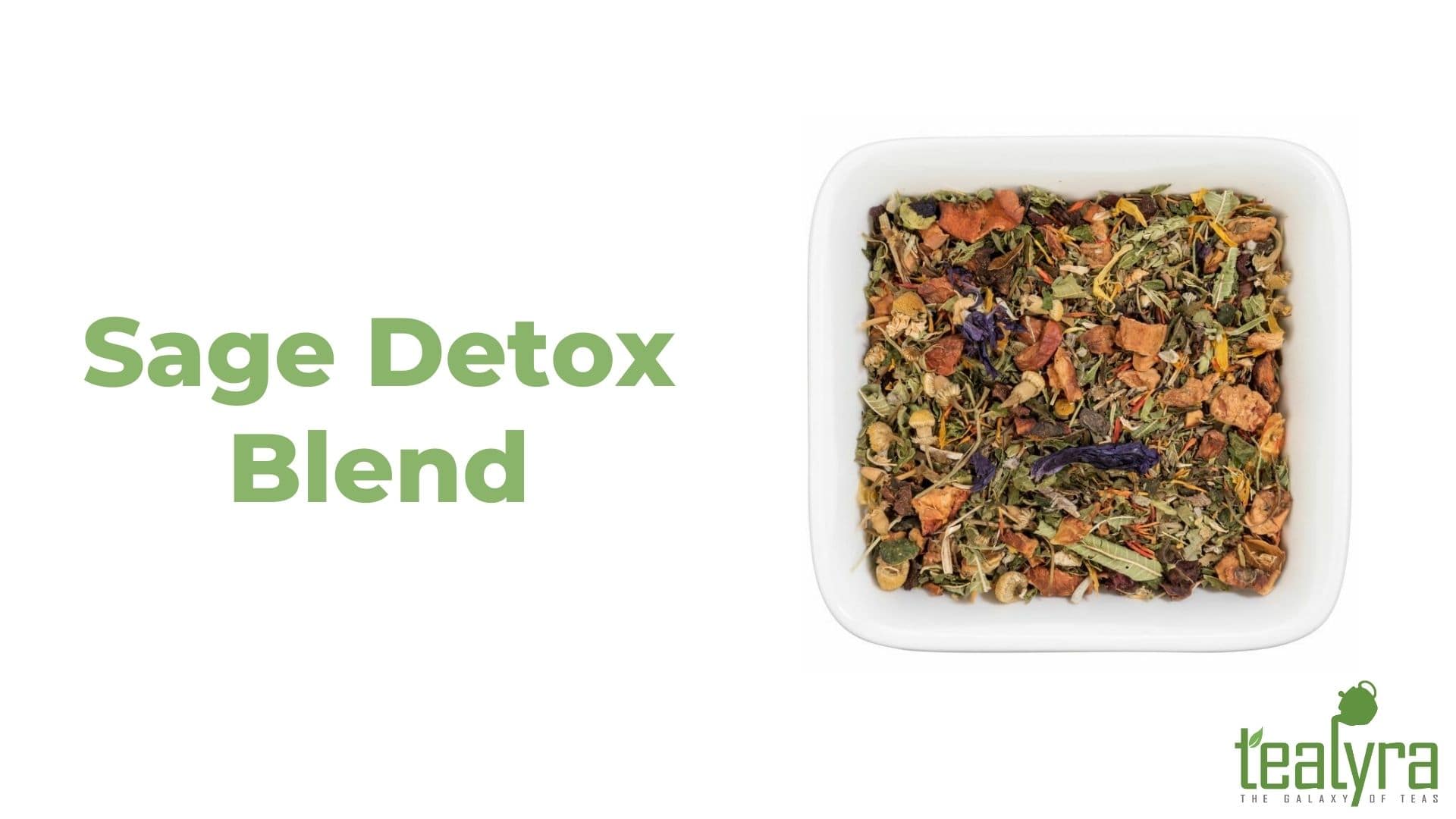 To brew, use a sachet of herb or a teaspoon of raw material in bulk per glass of hot water. The water should be boiled and then cooled - and 10 minutes after boiling you can use the tea.

A medicinal herb is not brewed with a reserve. If brewed chamomile stand for some time, it will become bitter.To feel comfort and ease in the stomach thanks to a unique composition of herbs and fruits you will help wild herbal tea - Sage Detox Blend. Chamomile, Apple, Beetroot, Blackberry leaves and Lemon Balm normalize the digestive system and restore intestinal microflora.

Attention! The drink should be consumed after a meal, but not earlier than an hour, then chamomile helps to normalize digestion.

The unused raw material after brewing can be used in the form of compresses and lotions. It also makes sense to use the brewed herb secondary for douches, baths and other external applications.

Usually take 1 tbsp. of dried chamomile mixture for 200 ml of boiling water. It is poured and infused for 15 to 30 minutes. Before drinking, you can strain the composition and add a little honey.

Invigorating with mint and apples

Take 1 tbsp. dried chamomile, add a handful of fresh mint, half a sour apple and 1 tbsp. honey. Fill the mixture with boiling water (400 ml) and let it infuse for 15 minutes.

Take 1 tsp. each of dried chamomile flowers and green tea and pour 200 ml of boiling water over them. After 5 minutes, you can add lemon and honey to taste. Infuse the drink for at least 15 minutes.

Take 1 tbsp. each of chamomile, linden honey, mint and boil with boiling water (200 ml). Add 2 lemon slices and the same amount of orange. Leave to brew for 30 minutes and drink throughout the day in small portions.

To speed up the metabolism and lose extra pounds, take 0.5 tsp. each of chamomile, immortelle, birch buds and St. John's wort, as well as a quarter of a lemon. All ingredients are mixed with a pre-sliced lemon and pour 200 ml of boiling water. After insisting on a water bath and boiling for 10 minutes, the infusion is strained and drunk during the day for half an hour before each meal.

External use of chamomile tea

Tea with chamomile, about the benefits and harms of which it is known a lot, is widely used externally. Once brewed, the plant increases its beneficial properties. Lotions and compresses with the decoction can quickly restore a healthy complexion, remove dark circles under the eyes, relieve swelling, accelerate the healing of wounds, cuts and abrasions, remove inflammation.

In the morning, it is recommended to put 1 cotton pad dipped in decoction or a brewed bag with the herb on the eyes for 10-15 minutes to give a healthy look to the face. Lotion based on chamomile decoction can be wiped over the face 3-5 times a day.

External use of chamomile tea: benefits for women

Infusion is used for inflammations of the urogenital system, making douches (for example, during exacerbation of symptoms of thrush). For skin diseases (psoriasis, atopic dermatitis and others), it is recommended to make baths with the addition of several liters of concentrated infusion. It also rinses the hair: it makes the strands strong and healthy, gives a beautiful light shade, as if they slightly burned in the sun.

Chamomile is used in the treatment of oral diseases: chewing a little brewed herb can get rid of unpleasant odor and inflammation. Do the procedure as a prophylactic for dental diseases. 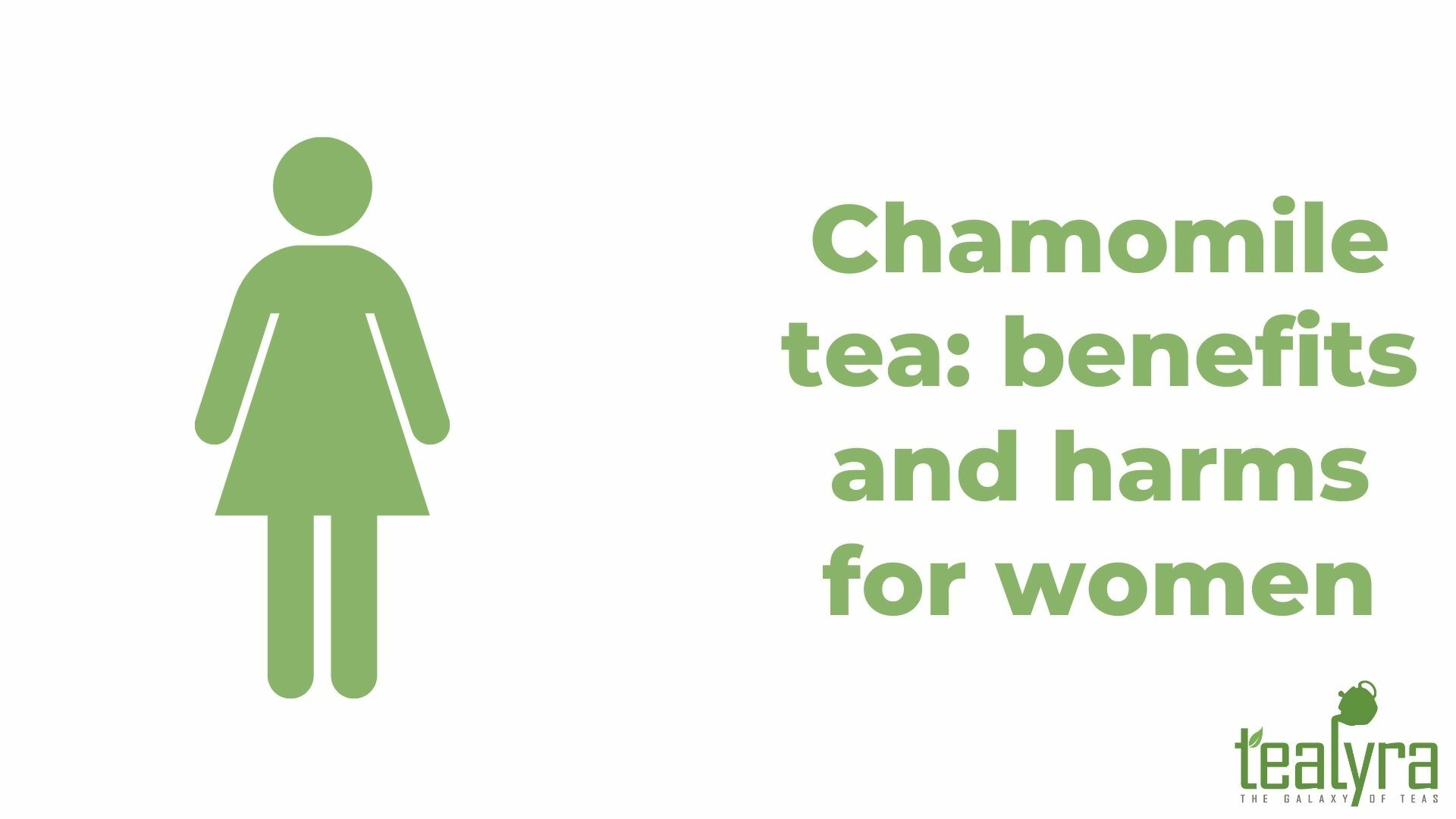 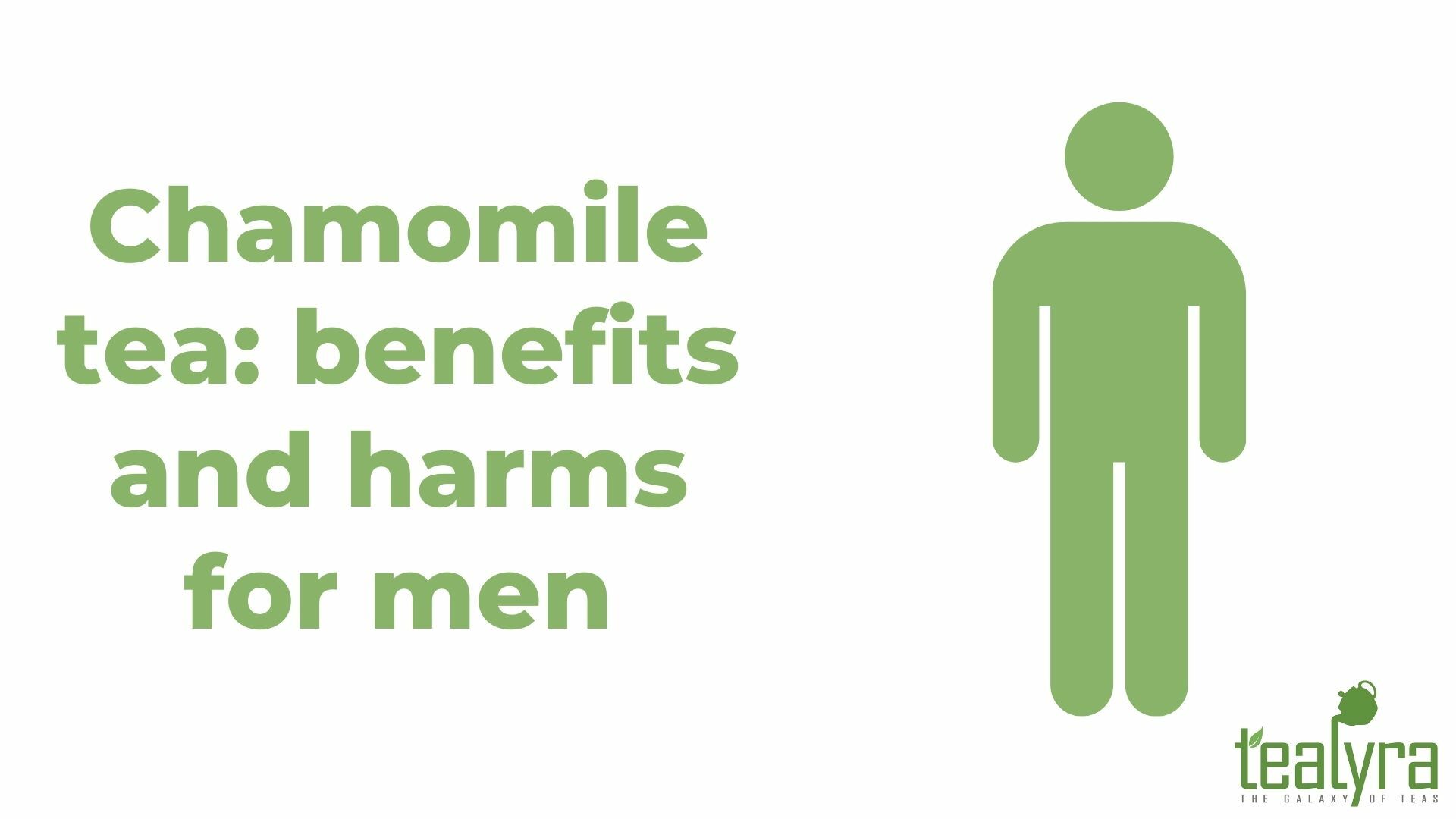 Useful properties of chamomile tea for the child's body

Contraindications and possible side effects 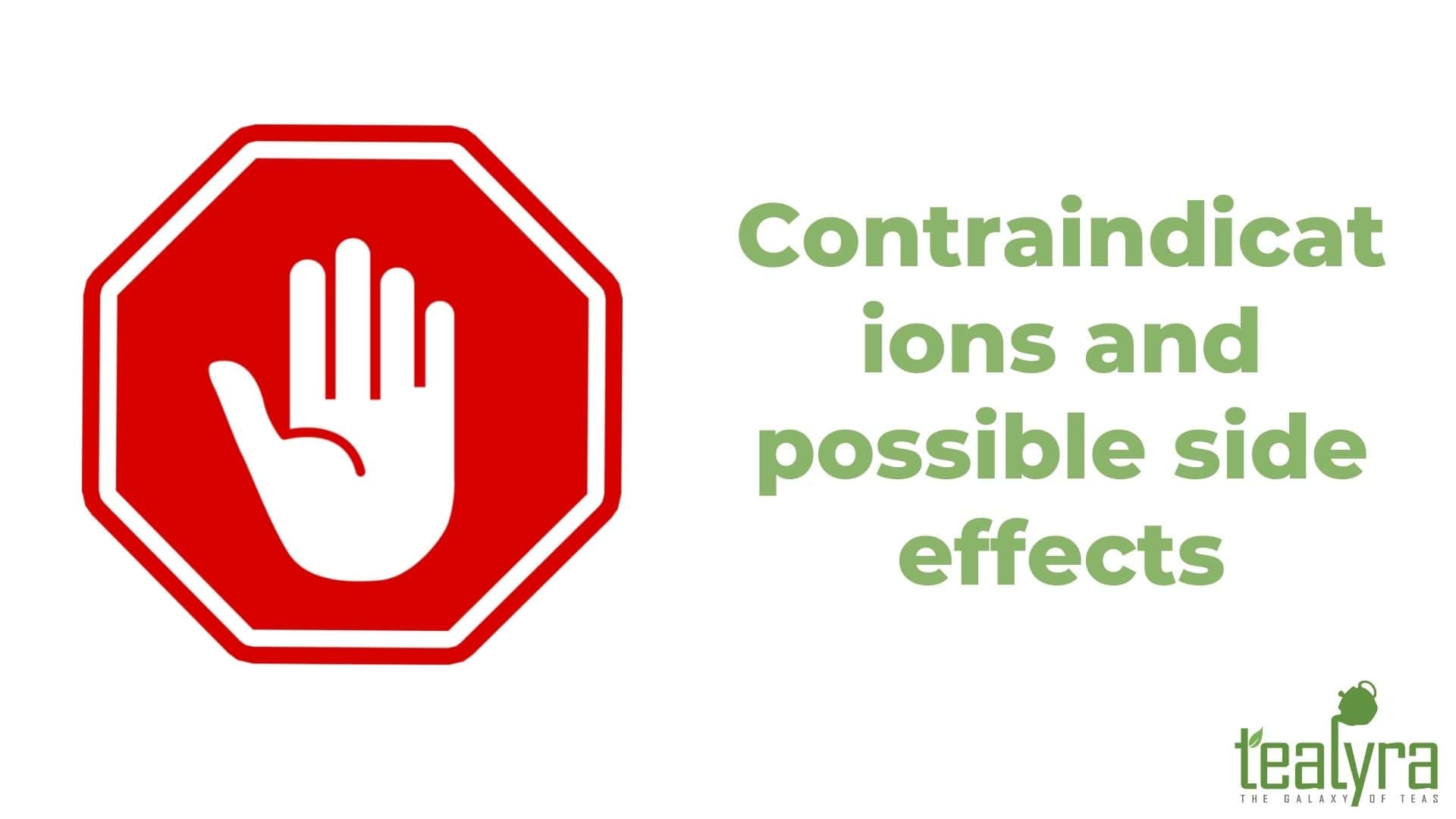 Chamomile is considered one of the most versatile and safe herbs, which is prescribed for therapy even for infants, its reception usually does not cause any side effects. But it is not for nothing that this plant is called a medicinal plant - the reception should be treated with caution.

First of all, it is forbidden to use it for people who have an individual intolerance or allergic reaction to this plant.

In addition, if the proportions are not observed, too strong infusion of chamomile can lead to weakness in the muscle tissues, headaches, low blood pressure, stool disorders. Continuous consumption of concentrated decoction can lead to a deterioration of the emotional state, since it contributes to a decrease in concentration, depressed or irritable mood of the person.

Do not take the decoction in the following cases:

Since the herb has a diuretic and sedative (sedative) action, it is better not to "mix" with other drugs that have similar effects.

Especially careful to control the reception of pregnant women. It stimulates the production of the hormone estrogen, with an excessive concentration or constant use of the decoction can cause problems with the preservation of pregnancy. Expectant mothers are allowed to drink only 1 cup of chamomile infusion of weak concentration per day.