US$
My Favorite
Account
Or sign-in with another identity provider
Login with FacebookLogin with GoogleLogin with Amazon
Register Sign in
Cart 0.00
0
0
View cart
Checkout
US$0.00
Cart is empty
Tea Store›Articles›Complete guide to Taiwanese oolong

Central Taiwan is full of mountains, and here grows some of the highest teas in the world, rivaled only by Indian Darjeeling.

The general trend: the higher the tea grows, the tastier and more expensive it is, but some plain teas can cost much more than highland teas (we will tell you about this separately). The climate changes with altitude, and the organoleptic properties of the tea change with the climate.

Often sellers add "highland" to each tea for more convincing, while in Taiwan officially highland teas may be called only those that grow above 1,000 meters above sea level. 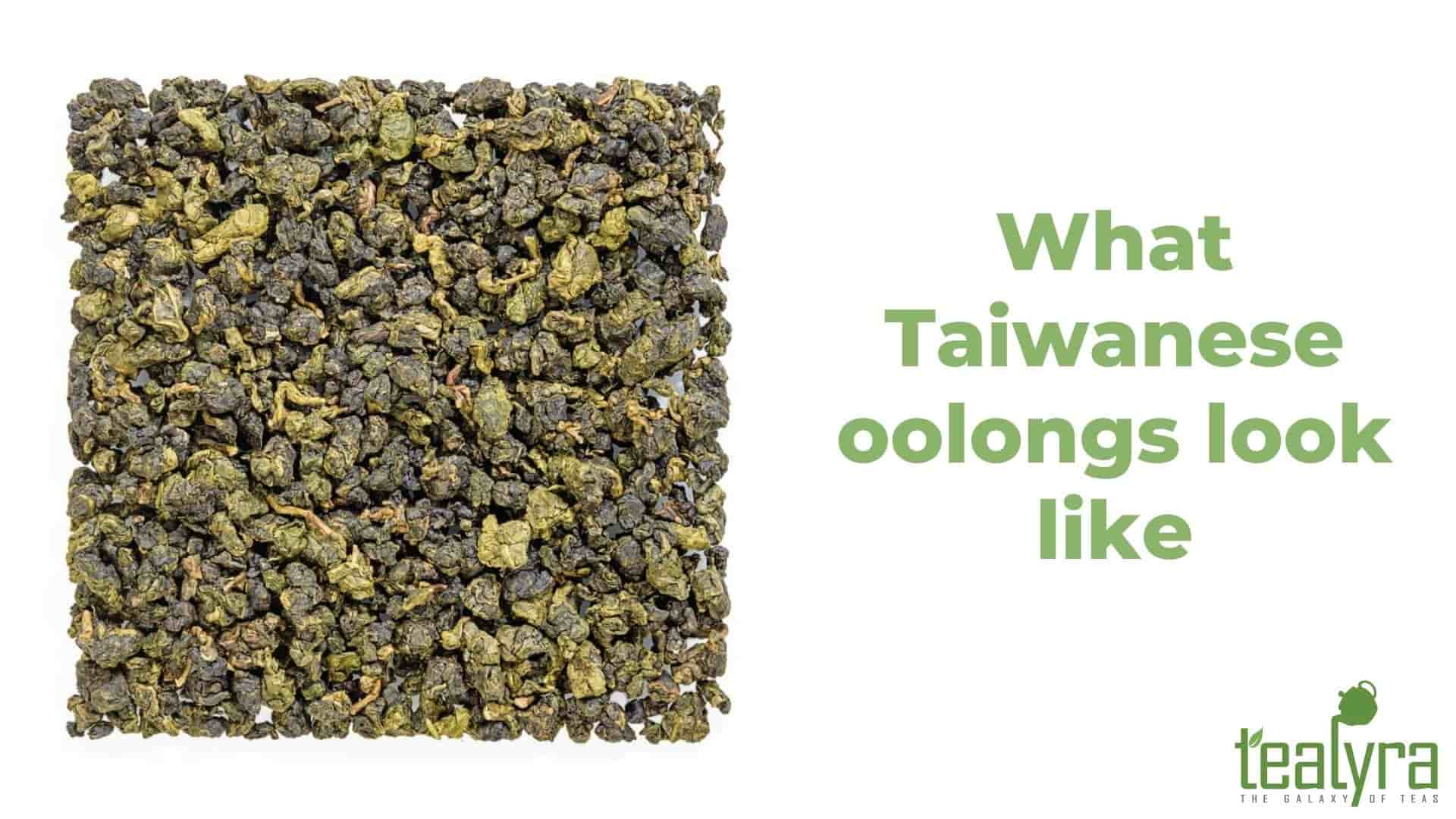 All Taiwanese oolongs are divided into two types: in balls (called "spherical twist") and in strips ("pushongs" or "longitudinal twist").

Many farmers from China's main "oolong" province, Fujian, once migrated to Taiwan. Those who lived in the south of it settled in the central Taiwan and started to make tea using the technology they were accustomed to - twisting the leaves into tight lumps at one stage, as they did at home with Tie Guan Yin tea. Farmers in northern Fujian settled in northern Taiwan and began to produce longitudinally rolled tea as they did in their home country of Wuishan.

If you do not take the difference of tea by region and variety of bush, the taste of oolong depends on:

During the fermentation stage, the leaves are crushed and the juice comes out, which under the influence of oxygen and enzymes changes the chemical composition and gives tea its rich aroma and flavor.

Roasting is needed to evaporate the rest of the moisture and "seal" the aroma inside the leaf.

Each oolong is produced with the degree of fermentation and roasting best suited for the particular variety. It is up to the master tea-maker to determine this.

Traditionally, these are mountain oolongs from central Taiwan (Ali Shan, Li Shan, Shan Lin Xi, etc.). They have a delicate but bright flavor with notes of flowers and a slight natural creaminess.

The classic medium-fermented oolong is Dong Fang. It comes in medium and strong roasts. The flavor is floral and caramel with baked notes.

Strong-fermented oolong is only produced in northern Taiwan. This is Mao Feng Oolong. Traditionally lightly roasted, despite the dark appearance of the leaf. It has a rich fruity-honey, slightly tart taste.

Ali Shan is the most famous oolong 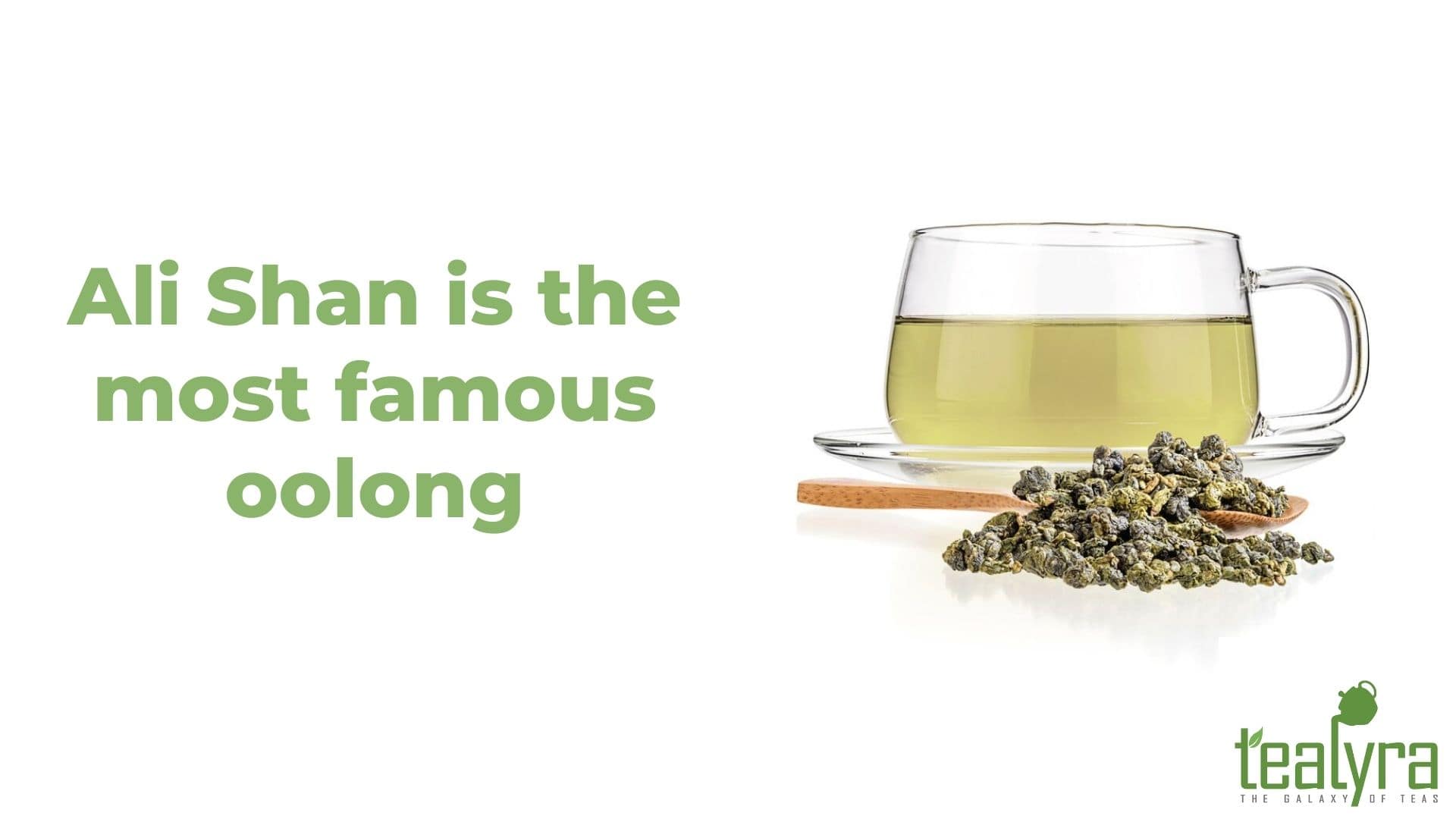 By the way, do not confuse Ali Shan and Li Shan - they are different tea regions, the distance between them is about 300 km.

Ali Shan oolong has a delicate milky aroma, a dense flavor with creamy and floral notes and a long and refreshing aftertaste. It is a kind of "dessert" tea - sweet, dense, but delicate - just the case when tea drinking is for the sake of tea drinking. When you want to create a carefree, sunny, spring mood, ali shan is just what you need.

The tea is noticeably relaxing, so it's safe to drink in the evening as well.

Dong Fang - the most unusual oolong and cicada tea 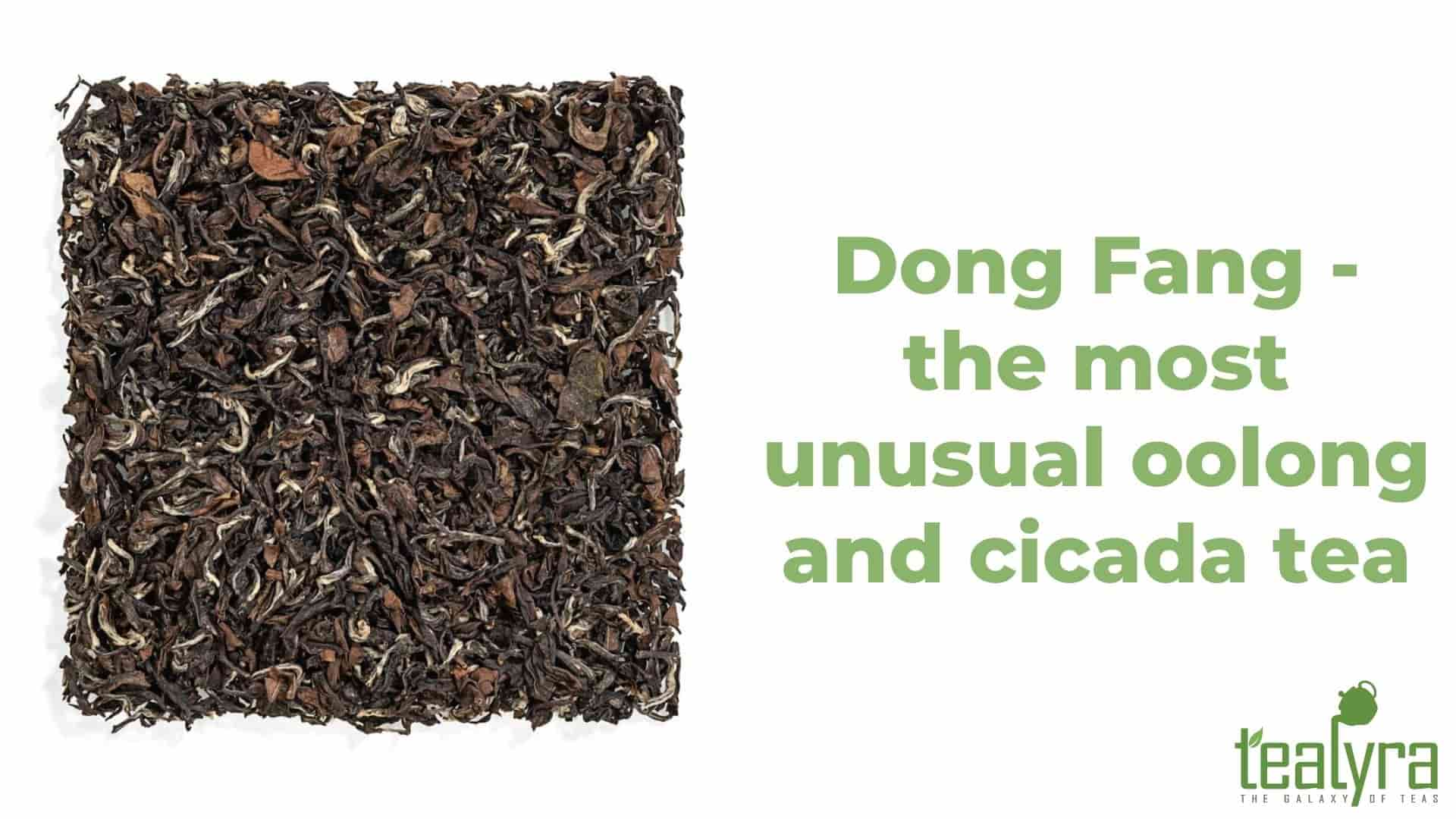 It is one of the most expensive and rare teas in Taiwan from the north of the island. It is very popular with local connoisseurs and is exported in very small quantities.

Every year in June, farmers wait for the green-winged tea cicada, which is involved in tea production. Its population depends on the weather and other conditions - if, for example, it uses pesticides and fertilizers that are unpleasant to it, it will go to a neighbor's garden.

Under the influence of cicada saliva, which contains enzymes, and oxygen in the leaf, the fermentation process begins while still on the bush. For protection, the leaf begins to produce an increased amount of polyphenols and tannins, as well as some antibodies (although the mechanism of their formation is not fully understood). For example, the leaf produces phytoalexin and is believed to be responsible for the rich fruity aroma that the tea later acquires.

In the production process, the leaves undergo fermentation twice. The raw material is wrapped in cloth and placed first in bamboo baskets and then in tin vessels, moistening the rolls. This is followed by drying. The result is a beautiful five-color tea.

The aroma of the dry brew is bright, musky, with hints of flowers. The taste is rich, subtle, honey-floral with hints of a slight spice.

By the way, it is believed that this tea is the ancestor of the famous Darjeeling and it was from Taiwan that the technology of tea production came to the Himalayas (though without tea cicadas). 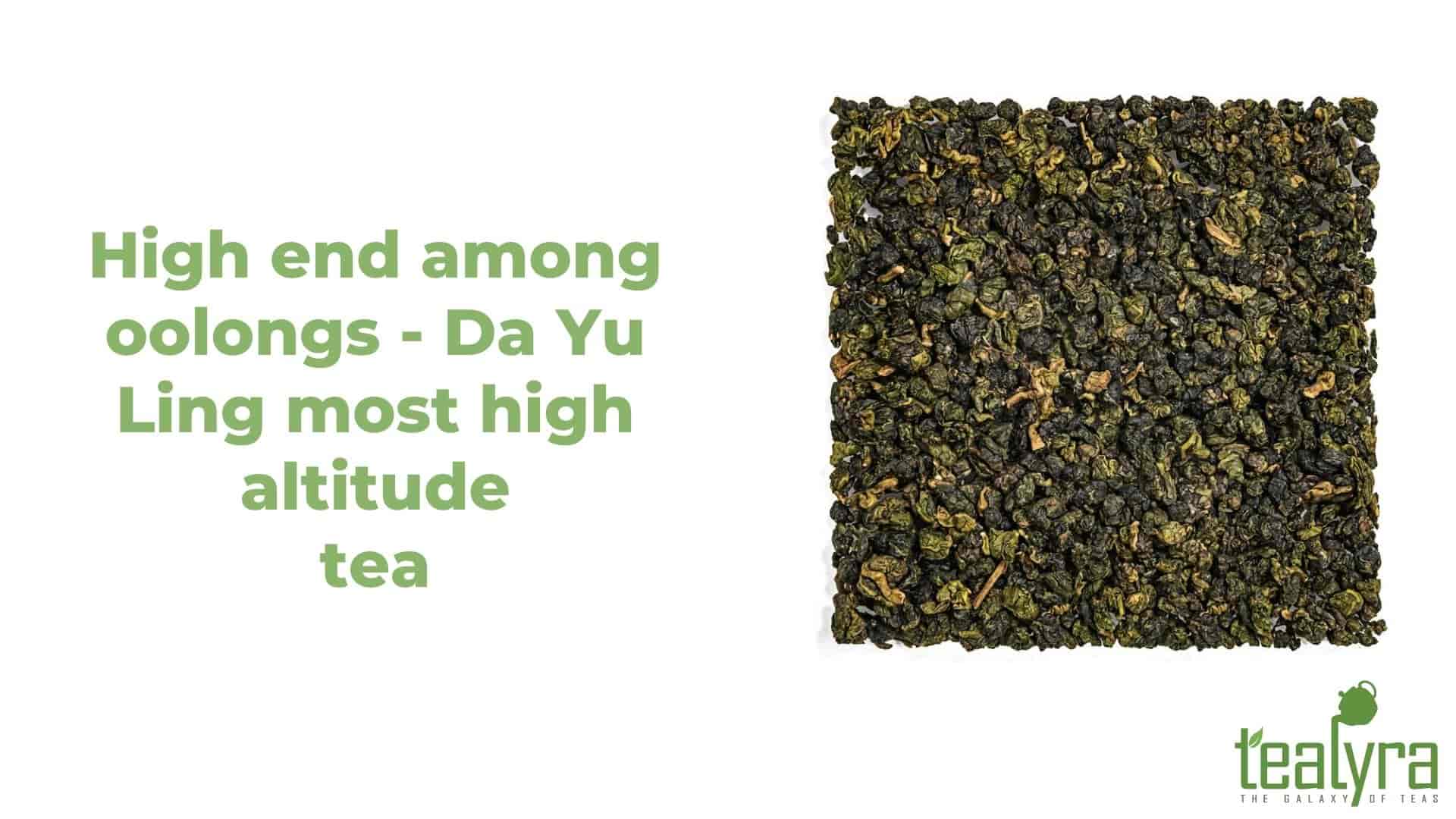 Da Yu Ling is one of the gardens of the Grand Li Shan tea region and the place where the best low-fermented oolong in the world, such an oolong high end, grows and produces.

The tea plantations are located about 2,200-2,600 meters above sea level, with the cleanest mountain air, large temperature differences during the day and night, and stony, mineral-rich soil.

Before the appearance of tea gardens, this was the summer "dacha" of Chiang Kai-shek, the leader of the ruling party in Taiwan, where he would take a helicopter to. Tea experts from Anxi County in Fujian Province were also invited here and created a new, exceptional variety of tea bush (please note: not tea, but bush) - Qing Xing "Wulong with green core". Even today, despite the variety of shrub varieties, oolongs from Qing Xing shrubs are the best, with the mildest and sweetest flavor.

Oolongs from Da Yu Ling have a buttery taste with hints of melon, honey, flowers and fruit and a refreshing, sweet aftertaste with a background of creamy and berry notes.

Alas, the amount of oolong produced here is extremely small - only about a ton a year.

How to brew Taiwanese oolongs 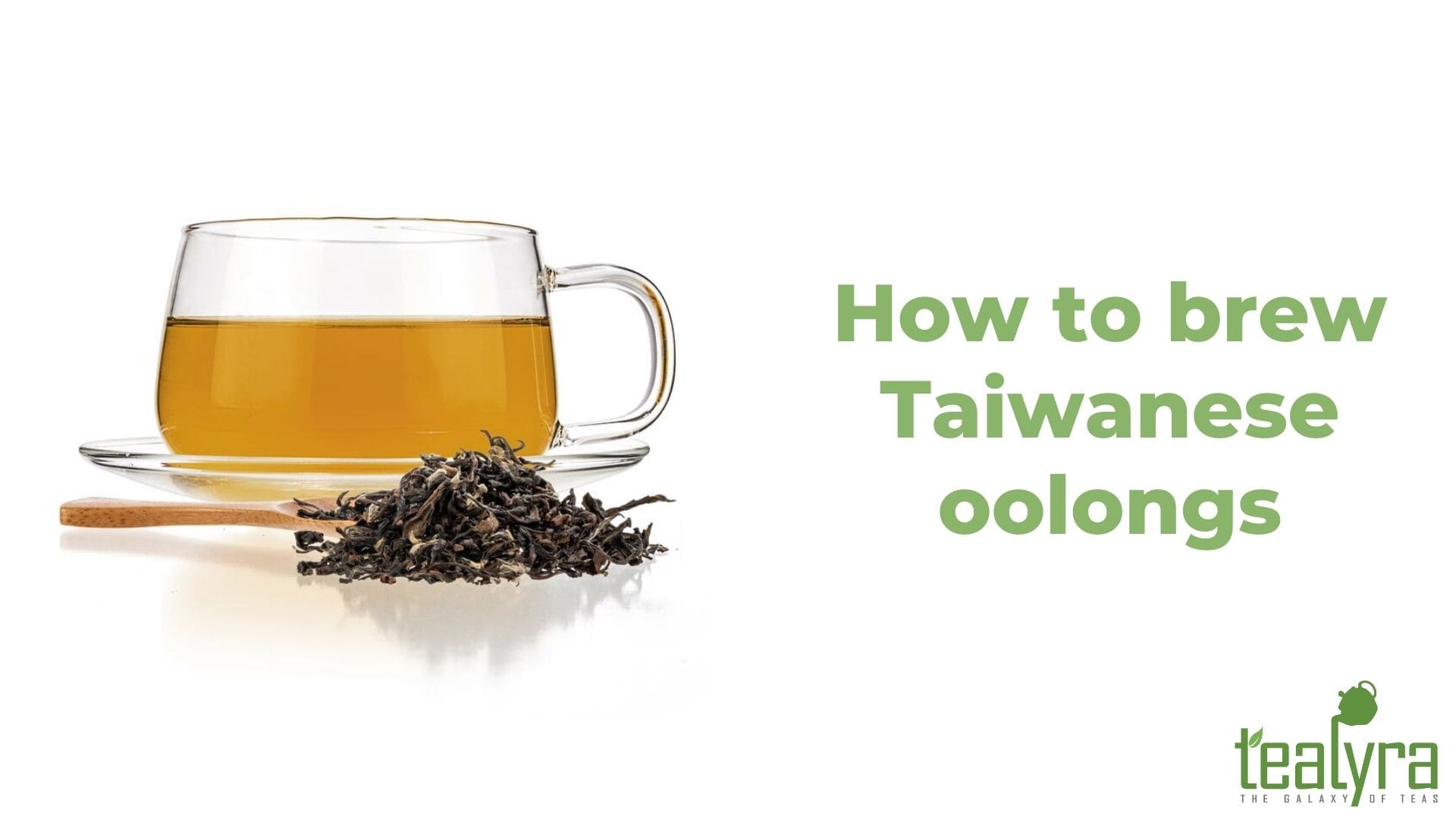 The water must be heated once. Repeated boiling takes the oxygen out of the water, it becomes unpalatable. Water is taken off the fire/plate at the very, very beginning of boiling. Anything before is raw water. Everything after is boiled over. You can brew, but the taste will not be the same.

The third condition: do not hesitate to take a lot of brew.

Usually it is 7 grams for every 100 ml of water. Ten spills for a good oolong are nothing, so you will get a liter of very tasty tea with this amount of brew.

The fourth condition is to heat the pot before brewing.

Simply pour boiling water into the container you want to brew the tea in and then drain it. Put the brew and, without pouring water, cover and shake a few times. Open and inhale the aroma - you'll be surprised!

5-10-15 seconds, depending on the variety and quality. Everything that affects taste and flavor is extracted into the water in the first seconds, the caffeine and other substances that make the infusion bitter come out the longest. Increase the time a little with each new strain.

Visit us in our store - we have a large selection of quality Taiwanese oolongs!